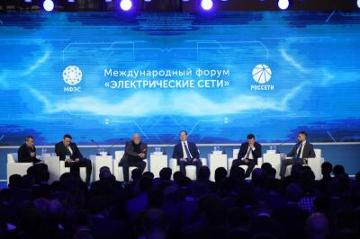 During the plenary session of the international "Power Grids" forum in Moscow, the participants discussed the prospects for creating a modern power grid complex in Russia based on digital technologies and concluded that in order to implement the outlined plans, it is necessary to improve the regulatory framework, to diversify defense industry products of the country for the civil infrastructure needs and carefully study the experience of foreign countries already implementing projects to build "smart" power grids.

In his opening remarks Minister of Energy of the Russian Federation Alexander Novak emphasized that a lot has already been done to improve reliability and quality of power supply, but energy sector is tasked to create a modern and consumer-friendly power grid complex that will be protected from external threats.

President of the Moscow School of Management SKOLKOVO Andrei Sharonov reminded that digitalization is one of the three main trends in global economy development. “For example, annual investments in digital projects in the world electric power industry exceeded $50 billion in 2016, while the expected cost reduction of the energy sector will be from 10 to 25%, i.e. will lead not only to an increase in efficiency, but also to a reduction in the final cost of electricity,” he noted.

CEO of the ROSSETI company group Pavel Livinskiy stated that in order to transfer the power grid complex to digital control and to achieve the stated figures both in terms of reliability and provided service cost, it is necessary to ensure the long-term financial sustainability of grid enterprises, to change business processes logic and to develop domestic component base production.

A lot has been done together with the Presidential Administration, the Government of the Russian Federation, relevant ministries and departments to resolve the first issue: in the near future, long-term tariff agreements for the power transmission and distribution will be concluded with the regions; the law on smart metering was approved by the RF State Duma in the first reading; a balanced, economically sound approach to preferential accession, power reserve and a uniform social burden on all categories of consumers was defined.

Today, to move forward, we need to formulate new uniform set of rules, based on the pilot projects results, adopt digital grid standard at the country level, and not just within the ROSSETI group. For this purpose, the company has developed and will soon submit for public discussion the concept of a new operation standard of the “smart” grid complex.

The head of the holding spoke about the ongoing work in terms of changes in management, production and technological processes within the company, as well as the formulation of requirements for the necessary technologies and equipment, so that all interested parties will have an understanding of what is needed and in what amounts.

“Today, together with colleagues from the power equipment and software manufacture, we are working hard to create and develop the required nomenclature production in Russia, paying great attention to data security. One of the ways to do that is the development of convergent technologies by the military-industrial complex, which will allow, on the one hand, to meet the demand of grid enterprises for modern cybersecurity equipment, and, on the other hand, to diversify our colleagues product line” said Pavel Livinskiy.

In conclusion, the head of ROSSETI spoke about plans for the development of additional services based on grid infrastructure, which comes into every house and opens up tremendous prospects for the company group to become the basis for the "Internet of Things" in the country.

Dominique Fache, Chairman of the Board of Directors of the Russian Technological Fund, called for a very careful assessment of the prospects for development of digitalization and the overall development of the electric power industry in the country, so as not to encounter an oversupply of new and even traditional, but already rebundant services. As a measure to reduce risk, the French specialist suggested investing not only in the development of production and infrastructure, but also in science, in order to reach the desired balance.

Sergei Kulikov, First Deputy Chairman of the Board of the Military Industrial Commission, focused on the development of partnership programs within the framework of digitalization of power grids both domestically, including the military-industrial complex, and with foreign colleagues, and also proposed to develop balanced approaches to the procurement for all interested parties. He specifically noted the potential of "Rosseti", taking into account its high level of outreach, to become an infrastructure bus for the entire digital economy of the country.

Member of the Board - Deputy Chairman of the Board of NP "Market Council" Association Oleg Barkin noted that it is important to achieve technology adaptation and provide open data access at all levels of the industry, including retail electric power markets and consumers.

Ilya Sachkov, the founder and CEO of Group-IB, focused attention of the audience on providing security for such critical infrastructure as the power grid complex. He noted that in order to accomplish this task it is extremely important to know who represents a threat and why does he do it, correctly implementing the probability theory in terms of potential threats. It is also necessary to constantly receive the latest and relevant information about methods, technologies and goals of cyber-criminals, by regularly reading reliable sources.