Mr. Pavel Livinskiy: "We Estimate the Creation of a Digital Power Grid Infrastructure by the Integrated Social and Economic Effects for the Regions" 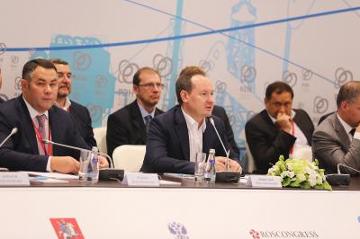 The Head of the Power Grid Holding Pavel Livinskiy discussed the progress in implementing the project of digitalization of electrical grids with the management of subsidiaries of the ROSSETI Group and heads of the regions.

Within the framework of the Russian Energy Week, an open meeting was held regarding "Digitalization of Grids in Practice: Ways and Solutions."

"These days, within the framework of such a representative forum, the real important and actual issues are being discussed. Today, the active introduction of digital technologies to the great extent determines the progressive development of each state. Our country is implementing the program "Digital Economy of the Russian Federation." The program aimed at making the economy, state administration, and social sphere more efficient and more competitive, stimulating the demand for innovative ideas and promising scientific research. Creating digital grids is an important element in creating a digital economy in the Russian Federation," he stated.

Pavel Livinskiy also stressed that for a stage-by-stage digital transformation, a logical path was chosen, the implementation of pilot projects for the further introduction of the best practices throughout the company's field of activity.

"The piloting process has already been launched in all subsidiaries of the ROSSETI Group; and the results are already considerable. We estimate the creation of a digital electrical grid infrastructure by the integrated social and economic effects for the regions. Implementation of the main capacities of new projects will have been completed next year, which will make it possible to reach the large-scale introduction of new technologies and adjustment of business processes as early as in 2020. For such a large infrastructure company, this is a rapid change we are about to cope with. It is important that we feel the understanding and support of regions, the government, and the president of the country," summed up the top manager of the Power Grid Holding.